This was supposed to be an April Fool's Day (and Max's birthday) post...but then some things happened and I fell behind schedule.
Can you spot the oddity in this picture? 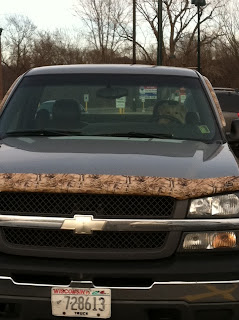 That's right! The dog driving the car from Wisconsin is NOT holding a gun or eating cheese.* 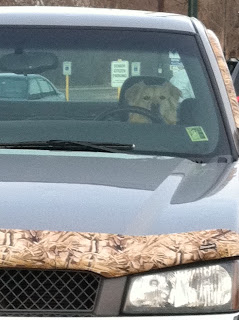 Happy April Fool's Tax Day!
*Not meant to be an factual statement about Wisconsinians.
Posted by maxandruby at 5:40 PM 1 comments

Max and the Frisbie

Today's story begins with our brave hero Maximus the Great as he boldly takes on Rubbles the Avenger in the race of the Blue Frisbie.

Maximus was feeling pretty great about his chances of taking home the ultimate prize of the Blue Frisbie. He'd been practicing his sprints, turns and body slams, and felt like this time he just might come out on top.

Unfortunately, the Blue Frisbie had other ideas. With the frisbie thrown, Maximus and Ruby dashed off in hot pursuit, a look of wicked delight on Max's face as he pulled ahead of Ruby. But with all his brain power focused on keeping his four feet from tripping up, he misjudged the distance between mouth and frisbie, and instead of snatching it up in his pearly whites, he somehow managed to insert his front paw into the hole ripped through the middle. (This Blue Frisbie is made of rubber.)

Not one to be defeated by a frisbie, Max grabbed the toy and shook it vigourously as if to say, "HaHA Frisbie! You may have grabbed my foot, but at the end of the day you will be in pieces on the grass!"

You can imagine his surprise when the frisbie, securely fixed around his front paw, refused to let go and as he lifted the frisbie to give it a good shake, his front paw followed.

His triumphant look was replaced with one of terror as he began to realize that this Blue Frisbie was refusing to let go. Like most people facing the horror of a killer frisbie, Max tried to flee. But that stubborn Blue Frisbie would not let go of his front paw, and Max's terror only increased as the Blue Frisbie continued to chase him around the yard.

Poor Max's distress was finally ended when my sister managed to tackle him as he passed by and pulled the frisbie off his leg.

He hasn't shown interest in the frisbie since.
Posted by maxandruby at 5:01 PM 1 comments

Cutest Picture of Ruby Ever?

You be the judge! Check out this picture of Rubbles when she was a baby. And I mean a tiny little baby that no one could possibly fathom would turn into the big hunk of lady she is today. 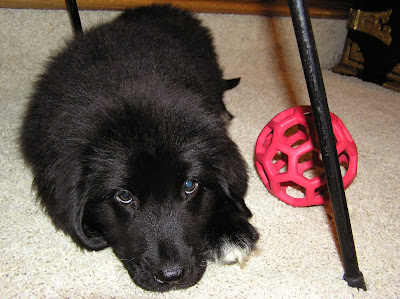 So what do you think? Cutest, or just pretty darn cute?
Posted by maxandruby at 12:43 PM 0 comments

Max and the French Fry

Ruby had to go to the vet a few days ago to get her teeth cleaned. For anyone who isn't familiar with doggie dental hygiene practices, they have to put your dog to sleep in order to clean their teeth. Needless to say, Ruby came home stoned, I took pictures, and those will be posted at a later date.

The big news for today is that even in her extremely drugged up state, she managed to eat a french fry.

On the way home from the dentist, my dad stopped for lunch, and saved some french fries for Max and Ruby. Once he got Ruby home, and she'd slept off enough of the anesthesia to stop drooling in her sleep, she received a french fry for being so brave.

Max, who was thrilled to have Ruby home, was prancing around the room with his new favorite toy in his mouth, a large red stuffed lobster. My sister found it at Costco and insisted Max would adore the lobster. And she was right, he loved that thing right up to the day he finally tore it into enough tiny pieces to extract the squeaker from inside.

But, at this point, the lobster was still very much intact and in Max's mouth. After giving Ruby a french fry, my dad held one out to Max.

Max toddled over to the french fry and stopped. He started at the french fry. He stared at my dad. He reached forward and sniffed the french fry with his nose. His eyes flicked down to the lobster hanging from his mouth. He began to wag his tail enthusiastically and prance back and forth, looking from the french fry, to my dad, to his lobster.

The brain hemorrhage that probably would have resulted from much more of this mental strain was prevented only when my dad reached out and gently took the lobster from Max's mouth and held it as he ate his french fry.

With his delicious treat successfully snacked, Max retrieved his lobster from my dad and went to comfort Ruby who had once again passed out on the living room floor, undoubtedly dreaming magical dreams of dancing lobsters juggling potatoes.
Posted by maxandruby at 1:05 PM 2 comments

Yesterday I found out my blog is featured on a pet blog carnival!
http://petsnthingsonline.com/2011/02/23/pet-writers-gathering-blog-carnival/
Exciting stuff, right?
So I'm bounding down the stairs to share the news with Max. When I dashed into the living room to share the news, I found him asleep.
I was momentarily disappointed until I took a good look at the way he was sleeping. That is when I took what might be the funniest picture of Max I have ever taken. 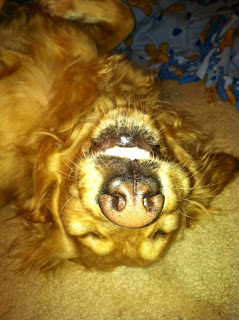 The best thing about this picture is the way it looks when you turn it upside-down. 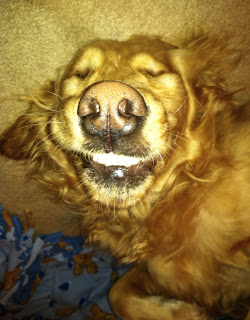 Pretty happy guy!
So, what do you think, is it the funniest picture of Max yet?
Posted by maxandruby at 12:00 PM 0 comments

The last day of Love Week!

This is it! I did it, an entire week posting every day. So my loyal readers, what do I have for you on this momentous occasion?
Well my friends, here is a little documentary I filmed on what I imagine it would be like to be chased by a bear. A bear that was then distracted by your small blonde friend and then ate him instead.
Love love love to my readers!
Posted by maxandruby at 9:20 PM 0 comments

Not that I had one today. I didn't. But I do love them!
Last time I had a snow day, I curled up in front of the fire with my blankey 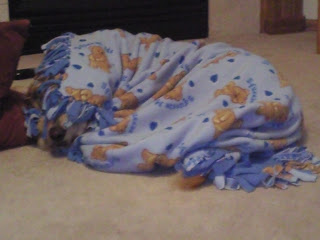 and then I got my hair done and watched some tv. 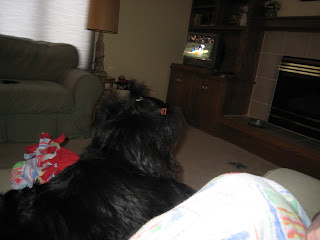 It was a pretty good day.
Posted by maxandruby at 6:37 PM 2 comments